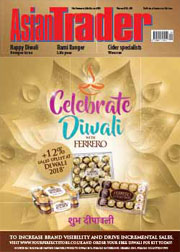 Founded in 1985, the magazine was launched to not only support the burgeoning Asian retail sector but to also help manufacturers and suppliers communicate with Asian retailers who had come to dominate the sector. Today, the title retains its unique connection with the Asian community, which accounts for 75 per cent of the independent retail sector. It has a wide and loyal readership and is read widely by independent retailers, wholesalers and suppliers.

Many of the UK's leading grocery suppliers such as Mondelez, Nestle, Mars, Coca-Cola and PepsiCo not only advertise in the magazine but consider Asian Trader a source of the latest information about the industry.

Asian Trader also hosts the annual Asian Trader Awards which recognises and celebrates the best and most innovative independent retailers in the country.

Asian Trader is online at www.asiantrader.biz.